Disclaimer: This is a post in which I discuss my firm stance against the ownership of guns. If this offends you, feel free to move along.

I usually never post about politics or other controversial subjects, but this is incredibly important to me. I personally believe this perspective needs to be heard and understood during this crucial time of year, which is the only reason that I am posting.

If you’re interested in reading my (sometimes emotional.. I can’t lie) perspective on a hot-button topic, please read on.

Please ask yourself these questions… and don’t just read them.

Literally, ask yourself the question. Take a second. Remember everything you were taught in regards to a moral framework in your entire life thus far, and compare.

Please, for the life of all things, take time to THINK.

Where is love in an assault rifle?

Where is God in a handgun?

Did you just read those words, or did you actually think about them?

The answer is simple. Nowhere.

Would Jesus have encouraged the disciples to be carrying?

Has anyone EVER been “saved” because of automatic weapons? (See: the incredibly violent and unhelpful crusades.)

Does the Bible (or any other religious text, for that matter) condone the carrying of weaponry, or the use of such weaponry, in order to end human life? You plan to give your loved one a gun for Christmas this year, but, sadly, you have no idea what you’re actually giving them.

In giving a weapon, you’re saying these things:

What a lovely holiday gift. What a sheer remembrance of our Lord and his lowly birth. What a Christian thing to do.

GUNS ARE THE PROBLEM

You can cry all you want about how guns are only a “tool,” and that it is the “user” who is at fault.

You can cry about how we have many other tools that are more deadly.

If you decide to pull the “cars are more deadly than guns” card, please feel free to never speak to me again.

When Henry Ford designed the first automobile, did he design it to be a killing machine? Did he equip it with the most efficient technology to injure a person or animal? NO.

The purpose of cars is to transport people. It is a positive purpose.

If you try to tell me that guns have ANY intended positive purpose whatsoever, I will laugh in your face.

Weapons are weapons. The purpose of firearms is to inflict bodily harm. There is NO OTHER INTENDED PURPOSE.

You cannot even begin to deny that sheer fact. Don’t even try. Don’t even whine. You’ll get slapped if you do.

GUNS ARE OWNED BY THE WEALTHY… AND NOT NEEDED BY ANYONE

Gun ownership is a rich man’s hobby. Does this offend you? Do you think I’m wrong?

Please, by all means, research for yourself how much people spend on various weaponry and ammo. Pop into a Cabela’s, or go even further and attend a gun show.

Look at who you see there.

You don’t see mothers with children in strollers looking at a lovely new rifle.

You see people with lots of cash and a very dangerous hobby.

These people have guns for funsies. They have guns because they find them interesting, they enjoy shooting them, and like working with machines. But owning a deadly AR “for fun” is such twisted logic.

It’s like saying “Oh, I manufacture cyanide as a hobby. It’s not dangerous! It won’t kill me as long as I do it right, and I definitely don’t intend on poisoning anyone.”

Intelligent folks still would look at you like you’ve lost your MIND. Because you have. You are a ticking time bomb.

If you do own guns for fun, and they’re not important to you for prideful, selfish reasons, then you will understand the drastic discordance you are living. As a believer in God who lovingly cares for machines designed to murder, you will realize that you are living a lie.

Please, go spend all that excess cash in a productive way. Like providing fresh water for underdeveloped nations. Or feeding orphans in inner cities. Or in any other way, really.

Do you notice anyone laying down their guns? Nope. Me either. Because nobody is willing to accept what they’re doing.

You raise the “country living means you need a gun” card. I see you.

My own grandmother has a pistol that she has kept unloaded all my life in a shoebox in her bedroom. She uses it to shoot armadillos and raccoons that cause trouble in her yard. Never ONCE has Granny needed to use that gun to protect her from anything more dangerous than that. When she encounters poisonous snakes, she kills them with the shovel.

My 82-year-old grandmother has no more need of a gun than you do.

An acquaintance of mine recently discredited higher taxes on weaponry due to the fact that it would make it more difficult for “poor people” to acquire guns.

If you live on the brink of poverty, your first concern should NOT be purchasing a handgun. Your money would be better spent on food and shelter for you and your loved ones. Guns are IN NO WAY A NECESSITY.

GUNS IN THE HOME MEAN HOMICIDE

My home will never hold a gun.

Not an unloaded gun.

Not a gun in a safe.

Not a gun “locked up” somewhere where “the kids can’t get to it.”

If you bring a gun into my home I will ask you to leave.

Guns in the Home and Risk of a Violent Death in the Home: Findings from a National Study in the American Journal of Epidemiology as published by Oxford Journals

You may shake your head and think that I go unprotected. That I will be shot someday by a burglar who enters my house and shoots me because I am unarmed. Honestly, if that is the way I am meant to die, so be it. If that’s how God intends to remove me from this earth, fine.

The chances of you ACTUALLY being able to protect yourself or your family with your “locked up in a safe where the kids can’t get it unloaded AR” are so low, it’s laughable. How many stories have you heard recently of fathers saving their families with a handgun? How many recent mass shootings were stopped by a “good guy with a gun?” NONE. ZERO.

Heaven help me if I fight fire with fire. If I injure or murder another person, even in self-defense, I am just as much a killer as they are.

Pause, and please read that statement again. Here it is again, again. Read it out loud, if you wish:

“If I injure or murder another person, even in self-defense, I am just as much a killer as they are.”

Whew. Glad we got that straightened out.

No taking of human life is justified… and I DOUBLE DOG DARE YOU to quote a Bible verse out of context attempting to prove me wrong. Because you won’t even FIND one.

It is not my place to end a life. If my life is going to end, so be it.

If you want to play God and decide who gets to live and who gets to die, then I know who you need to have a long conversation with and it’s not anybody on this earth.

There are no guns in heaven. I can promise you that.

OTHER NATIONS DO NOT CONDONE GUNS

Other countries around the world get it. That’s why America is the ONLY (truth. Look it up.) country in which mass shootings regularly happen. WE ARE THE ONLY ONES.

Did you read that? If not, please. Read it again.

In case you’re more of a visual learner, this graph from the HDI is quite impossible to ignore. Do yourself a favor and actually imagine the little stack of people in the USA column stretching up past the boundaries of the graph where it would actually go if it were one person on top of the other like the other countries.

In case you’re curious, that stack of bodies (for that’s truly what it represents) would be four times higher than the next country (Switzerland… also a country that preaches a high percentage of firearm ownership. hmm.) 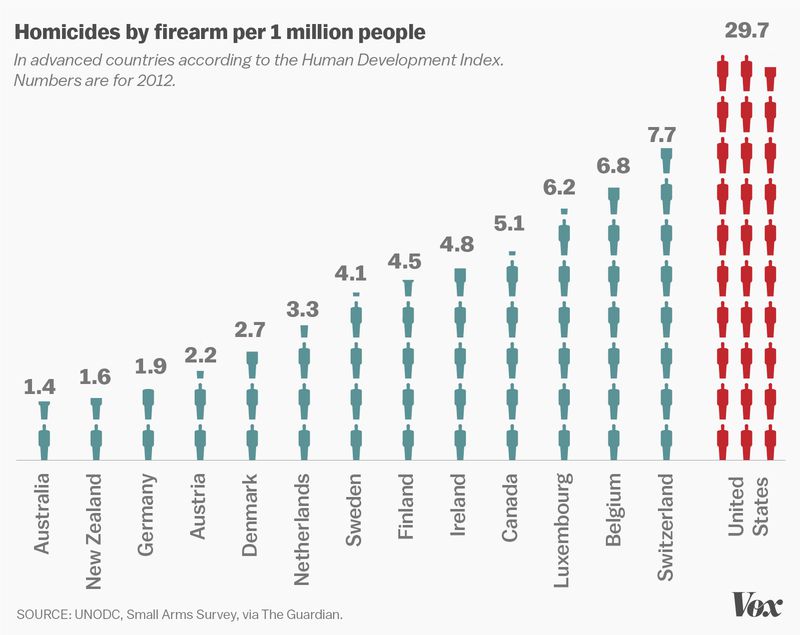 In case you’re at all wondering if I’m full of it and don’t know what I’m talking about, here are some recently-published examples about the positive effects of strict gun control to still your fluttering heart.

To those of you that will tout that criminals do not respond to laws, see below.

To those of you that might be ignorant enough to demand that “If I’m so against our gun situation, then just move to one of those places”…. I laugh.

I will be moving very, very, VERY soon.

However, people I love dearly aim to remain in the US of A. These perspectives have to be stated. People have to know. SPIRITUAL PEOPLE DO NOT CONDONE GUNS

The most beloved spiritual figures in human history taught principles of peace.

Just in case you’re missing the point here, no harm means no having or using machines whose only purpose is to do harm.

Need a list? Check out the peaceful antics of these superstars:

Nonviolence is the only ethical way of protesting oppression in its many forms. If you disagree, look up the actual meaning of ethics.

These people managed to make HUGE change in our world as we know it. Their methods were incredibly effective. Perhaps, if you’re being honest with yourself, some of the most effective changes that have ever occurred in human society.

Without guns. By the way.

So, if you gun-happy Texans are the same people touting that you want a “Christian country,” keeping out refugees and other believers, then you better lay down your weapons. Otherwise you’re the biggest hypocrites I know.

Also, please see every word Jesus Christ has ever been recorded having spoken. You could use a good refresher course.

MORAL OF THE STORY

This also serves as your tl;dr section, so feel free to skip here.

In America (and thus in our world) we have an extreme problem with violence. Specifically, firearm and gun violence.

I, and countless others, are sick and tired of shootings happening right at home, and returning to our facebook feeds to see “friends” supporting gun ownership. We are sick of the selfishness, the ignorance, and the lies.

Guns are the problem (see immense level of logical and intellectually published reasoning above).

At this, the most loving and beautiful time of year, I urge you to reconsider your stance on gun control with a spiritual perspective and discern whether or not you actually walk what you talk.

Don’t let this be the Christmas message you’re sending out:

Nonviolence is a powerful and just weapon, which cuts without wounding and enobles the man who wields it. It is a sword that heals. -MLK Jr.