***Spoiler alert! If you haven’t seen Disney’s live-action Beauty and the Beast yet, stop reading now. It’s not like the plot of the fairy tale changed at all, but there are still some details mentioned here that I’d rather you discover on your own when seeing the film!***

When Belle is your favorite princess and Beauty and the Beast ranks among your top three Disney animated films of all time, you have to be excited about the new live-action remake. I certainly was—nearly about to burst in anticipation, in fact.

This film was stunning in a visual, musical, and historical sense, all of which struck me on my first trip to the movie theatre. It was perfectly respectful of the original, while incorporating several new elements that added something new to the story. There’s only one complaint I had about the film as a whole, and that’s a minor distraction compared with such a fantastic achievement.

Leading Up To The Big Day

“It’s never going to be as good as the original.”

“I can’t ever see Emma Watson without seeing Hermoine.”

“I hope they don’t ruin the singing.”

All of these were actual comments said to me in the past couple of weeks in anticipation of the new Beauty and the Beast—and all I could do was try to reign in my excitement.

I had tears in my eyes every time the trailer came onto the movie screen. That piano melody playing over the “Disney” castle got me every single time.

I watched every interview I could find online about the cast and behind-the-scenes filming.

I put on my blue dress and white blouse, styled my hair into Emma’s Belle ponytail (shout-out to Cute Girls Hairstyles for always having my back), and headed to the theatre full of excitement.

When the theatre lights dimmed, I got goosebumps. 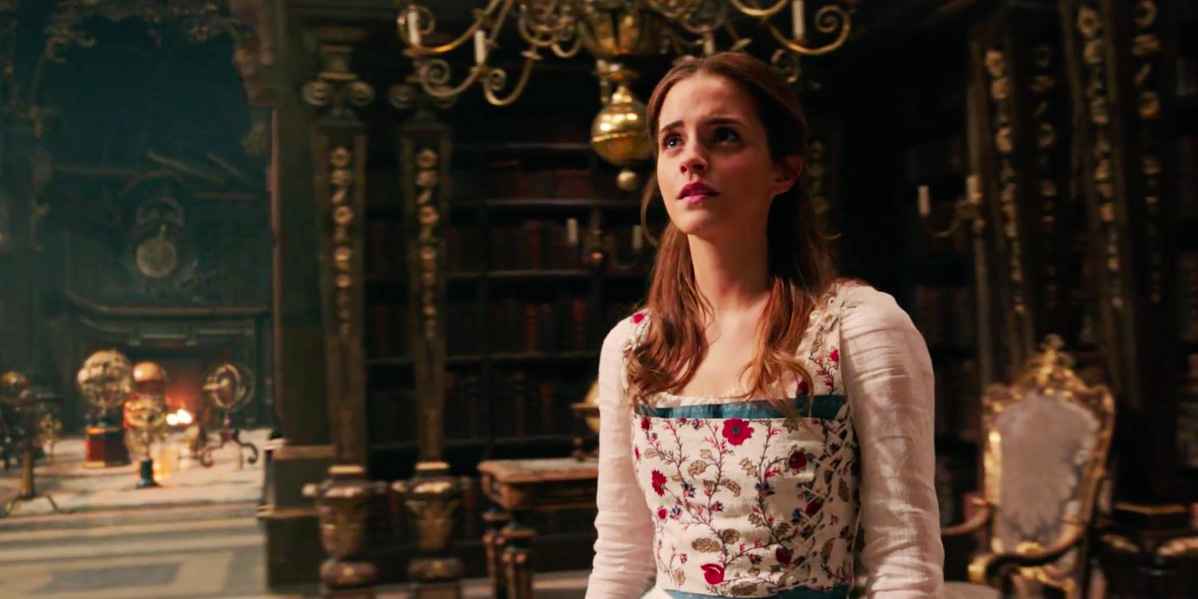 Elements That Stood Out Most In The Film

The Castle was absolutely and utterly stunning. Every square inch of it reminded me of Versailles—from the gold-leaf decorations on the walls to the architecture of the front courtyard. The meshing of the hall of mirrors and the ballroom was stunning. There were even ceramic heaters in the corners of the rooms!

The Music paid due homage to the original. As it should, considering the involvement of original composer Alan Menken. I loved hearing snippets of the original melodies entering at new points throughout the story. The vocals were well done, with no complaints. Of course Emma Watson is no Paige O’Hara, but she did fine, especially in moments where she sang out more. Audra’s addition to the film was beautiful, historical, and tasteful.

The New Additions were received well in my theatre. We laughed at the new jokes, we were shocked by the new cruelty expressed by Gaston. I enjoyed the development of LeFou’s character, and I enjoyed learning a bit about Belle’s past. The film gave significant nods to de Villeneuve’s original french version of the tale, which the folklorist in me appreciated. I also had one of my major questions from the animated film answered (why don’t the Beast’s subjects ever notice their suddenly-missing monarch??)

The Likeness To The Original was a bit of a surprise to me. And, dare I say, was my main complaint (if I were to choose one). For the most part, the film proceeded exactly the same as the animated movie that I’ve watched 500 bazillion times—which, surprisingly, somehow, made it feel long. We all left the theatre yawning, and not energized. The pacing of the original movie was so beautifully done, but somehow this one lacked the excitement. I think the screenplay could have been just a little bit more risky with adding a new take on the story.

Beauty And The Beast—Graded By Myself And Others

With a 70% rating by critics and an 86% rating by audiences on Rotten Tomatoes, I’d say my rankings are a bit higher than most. “Overlong,” “campy,” and “overly-rendered” are a few words used by critics on the site who opposed the film, but I’d say perhaps the only one that I agree with is the first.

The Bottom Line: See And Enjoy

In all honesty, though I loved the film immensely, I’d have to say that I enjoyed the trailer more. I actually cried while watching the trailer, but the full movie didn’t exact the same level of emotion from me. I’m not saying that Beauty and the Beast didn’t live up to its trailer—but I am saying that the pacing of the trailer may have been more exciting and engaging than the actual film as a whole.

All in all, this was a strikingly beautiful film that was a beautiful tribute to an original classic. I am so glad Disney is continuing in this vein and breathing new life into the tales we grew up with.

Also, I came home and immediately started searching online for where to buy Belle’s golden ear cuff. Like my dear friend Morgan says, “I MUST HAVE IT.”

What were your favorite moments of the film? Who was your favorite casting pick for the live action version? Do you wish Disney had done anything differently this time around? I’d love to start a conversation with you in the comments below.